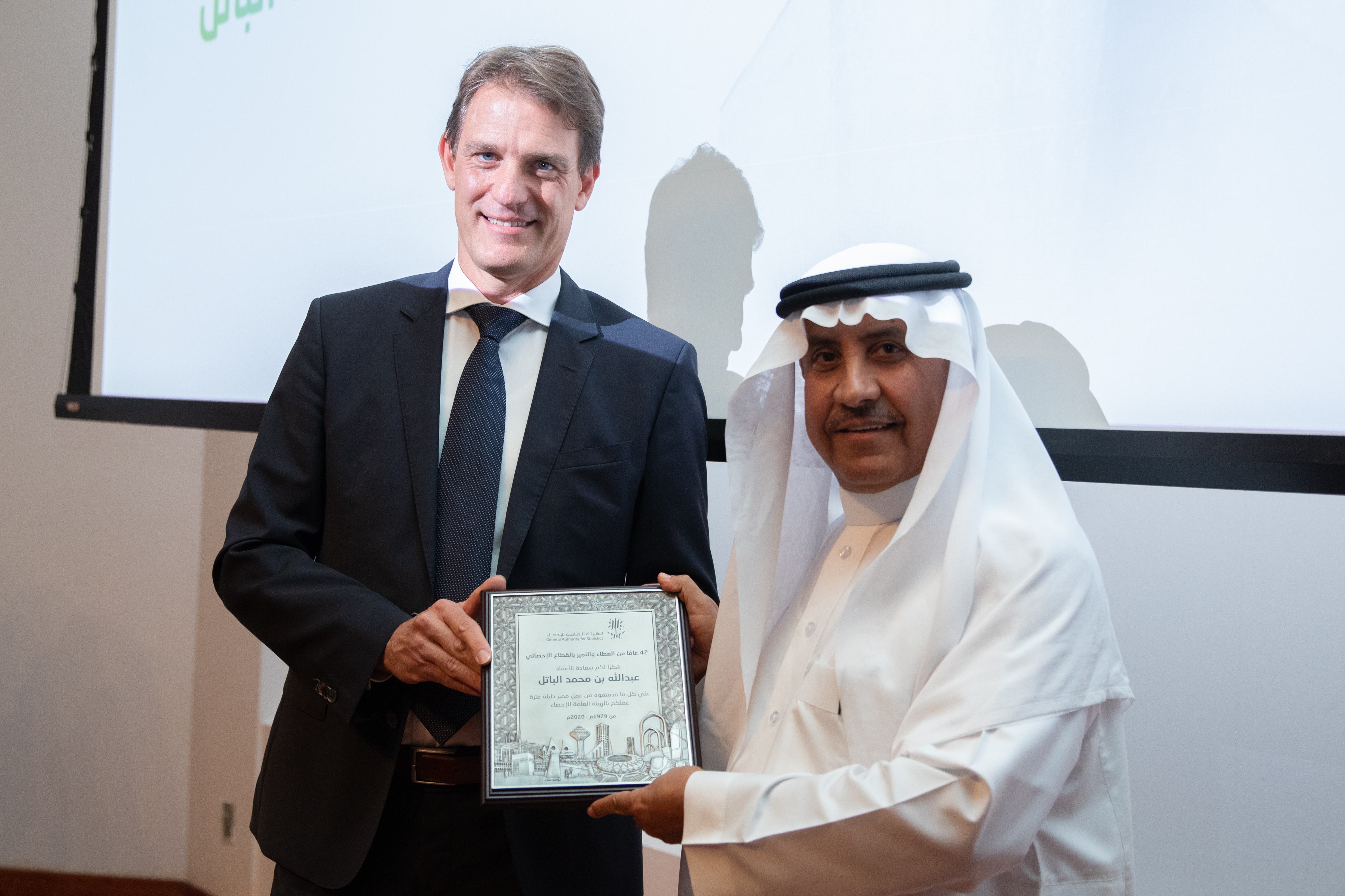 At the end of his statistical work journey

GASTAT president honors Albatel after a successful career path that lasts for 40 years.

In the presence of a number of leaders and employees of the General Authority for Statistics, GASTAT President, Dr. Konrad Pesendorfer, honored Mr. Abdullah Albatel, the president’s advisor, and ex- vice-president, on the occasion of reaching the retirement age, at GASTAT headquarters in Riyadh.

In the honoring ceremony, GASTAT president thanked and appreciated Mr. Albatel for the efforts he made throughout his work, and for his dedication and sincerity, wishing him success in future endeavors. In his speech, Mr. Albatel was keen to confirm the continuity of work development from one generation to another.

On the other hand, Mr. Albatel expressed his sincere thanks, appreciation and gratitude to GASTAT president for the kind initiative in honoring him at the end of his statistical career. He affirmed his pride in his colleagues at the authority with their great confidence and capabilities the statistical sector in Saudi Arabia has, stating: “I do not remember that the authority faced a challenge that could not be addressed by my colleagues, and this is clear evidence that the authority relies on competences and sincere national experiences that distinguished the statistical work system in the Kingdom".

Albatel stressed the importance of accurate statistical data and indicators that transparently reflect the reality of all fields in Saudi Arabia, to be presented to decision-makers, policy-makers and those interested, so that everyone can benefit from their acquired data to help them develop future actions and draw up integrated sustainable development plans.

Mr. Albatel said with pride: “The statistical work has contributed to the growth and development of the Kingdom and the provision of the appropriate environment and tools necessary for the success of the Saudi Vision 2030 by supporting and coordinating efforts among all components of the statistical sector to enhance its role in supporting this ambitious vision”.

It is noteworthy that Mr. Albatel is one of the most prominent statistical figures in Saudi Arabia, as his career path in the statistical sector spans for over 5 decades. His keen experience contributed to the development of statistical work during his career in the Central Department of Statistics and Information and the General Authority for Statistics. Mr.Albatel started his career path as a statistician, and progressed to later becoming the vice president of the Authority. Moreover, Mr.Albatel contributed to the completion of four general census of population, housing and establishments, in addition to statistical work in economic and social statistics, among others.

It is worth noting that Mr. Albatel has also represented the Kingdom in many forums, conferences, both in local and international meetings. He also contributed in drafting the systems, regulations and decisions that led to the development of statistical work up to what is has become today.

He was honored by GASTAT’s president, Dr. Konrad Pesendorfer, in appreciation of the important and prominent role he played throughout his career, and his enrichment of statistical work in the Kingdom.

During the ceremony, Mr. Mohammed Al-Dukhaini, Strategic Communication and Client Support deputy, and GASTAT spokesperson delivered a speech on behalf of GASTAT employees, in which he expressed the sincerest appreciation and gratitude for Mr.Albatels’s support for them reflecting by his gentleness of morals, nobility, and with his long practical experience.

Mr.Albatel will always be an important reference for following generations in the Authority.